This is the supreme cinnamon fragrance oil! If you've used cinnamon in soap before you know it can misbehave. Most cinnamon accelerates like a beast, and it's not generally skin safe.

This cinnamon is perfect! It doesn't discolor or accelerate soap and smells absolutely scrumptious. Top notes of cinnamon are complemented with toasted bread middle notes. At the bottom of this fragrance are subtle sugar and butter notes. It's so, so good!

Love the scent of Supreme Cinnamon. Perfect for a Valentine's Day scent. 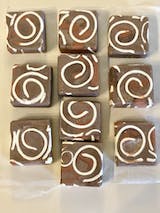 Oh my gosh exactly what I was looking for! So glad I ordered the 16 oz. Worked wonderfully in my hp and also in soy tarts! Love Love Love! Used in my diffuser and the next day I was trying to figure out what it was I had baked as the house smelled like something was baking...something delicious.

A
A.
Best cinnamon single note EVER to make your own creations!

I was drawn to this because I love cinnamon in any blend I've smelled and have been intrigued to make my own creations with something that wouldn't accelerate.
WOW! I'm so glad I went out on a limb and ordered the 4 ounce to start with. I've mixed this with several things and its so versatile I'm never going to be without this now!!!
My favorite mix so far is with Mad About Mint and its been a great hit in my holiday lineup...thank you so much Nurture Soaps for such wonderful supplies to work with!

Very fragrant! I’m looking forward to trying it in my next cold process soap.

Based on 17 reviews Write a review

Invalid password
Enter
Product has been added to your wishlist.
You can view your wishlist by creating or logging in to your account.
Please create account through ##customer_email## email
Login Register
0